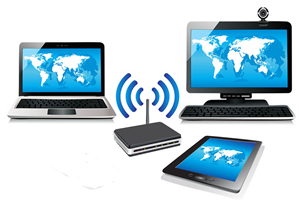 This is article will discuss how to troubleshoot problems with wireless networks.
If you're using a wired network, click here for the Wired Network troubleshooting article.

If you've carefully followed the Networking Instructions, but are still unable to view your server in Step 9 here some troubleshooting suggestions. Getting a computer expert involved is highly recommended.

Here are the steps to start the troubleshooting process:

Shut everything down, wait one minute then restart the equipment in this order: router, server, guests.
Wait for the router to completely reboot before starting the server, and wait for the server to complete reboot and open the Studio Organizer as shared files before opening the guests.

Windows Firewall is known for blocking applications that have been previously cleared to send traffic. Check this firewall often and RESTART after making any changes.

If at this point you're still having no success, it's possible there is a problem with the wireless router, or the operating system of your computer. The fastest way to verify your Studio Organizer data files are functioning correctly and that the problem is elsewhere is to set up a test network on a different wireless network, using a different computer and router. In other words, you're removing everything but the Studio Organizer from the equation.

To do this, install the full working copy of FileMaker Pro 13 on an entirely different wireless network. To start, you don’t even need to install the Studio Organizer. Instead, just set up one of the FileMaker Pro samples files as a shared file by following the Networking Instructions.

Now open the sample file on your iPad or guest computer. If everything works great, the next step is to use the Transferring Data Wizard to move the Studio Organizer 6 to this second wireless network. Click here for the instructions for using the Transferring Data Wizard.
(Please be sure to use the Wizard, otherwise your Registration Code is not included with your data.)

Once you’ve verified everything works on a different network using different equipment you now know for certain there isn’t a problem with the code of the Studio Organizer. This means you can now move forward with finding the culprit on your school network. It may be a corruption issue, or it may be a hardware issue, but in either case you've now verified the problem is only occurring on the school network.

Reinstall the operating system on the computer being used as the server. This is time consuming, and a definitely a task for a computer expert, but solves a multitude of potential problems.

I've recently done this with my primary programming computer and a second computer. Both machines run like new now and the time invested was well spent.