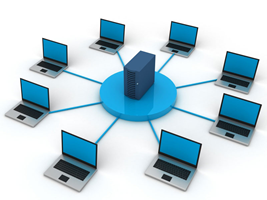 This is article will discuss how to troubleshoot problems with wired networks.
If you're using a wireless network, click here for the Wireless Network troubleshooting article.

First and foremost, you'll need to get a computer expert involved. Preferably, this should be the person that set up the network and security.

Shut everything down and disconnect the power to all routers.

Examine all network wires. Be sure network wires have not been coiled up. This will create an impedance that can dramatically decreases signal throughput. Also, be sure your network wires are not near or draped over the other electronic equipment. For example, fluorescent lights have large ballasts that create wide electro-magnetic fields of interference.

Wait one minute then restart the equipment in this order: router, server, guests. Wait for the router to completely reboot before starting the server, and wait for the server to complete reboot and open the Studio Organizer as shared files before opening the guests.

Set up a Test Wireless Network

If at this point you're still having no success, it's possible there is a problem with your router, the wires you're using, or the operating system of your computer. The fastest way to verify your Studio Organizer data files are functioning correctly and that the problem is elsewhere is to set up a test network on a wireless network. In other words, you're removing your existing wires and router from the equation.

To do this, purchase a wireless router and connect your server and one guest computer to the new wireless router. Test the performance. Once you’ve verified everything works on a different network using different equipment you now know for certain there isn’t a problem with the code of the Studio Organizer. This means you can now move forward with finding the culprit on your school network. It may be a corruption issue, or it may be a hardware issue, but in either case you've now verified the problem is only occurring on the wired network.

If an ethernet wire is bad, this can be confirmed by a network technician. Bad wires may be damaged due to age, lightning or improper placement. Quite often a wire will be fine, but it's signal is interfered with due to being coiled, or placed near a source of electro-magnetic radiation, such as fluorescent lights.

If all else fails, at this point you'll want to reinstall the operating system on the computer being used as the server. This is time consuming, and a definitely a task for a computer expert, but solves a multitude of potential problems.